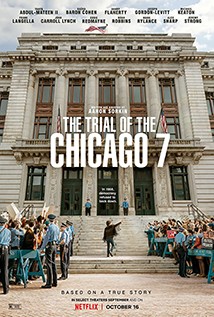 In 1969, seven people were charged by the federal government with conspiracy and more, arising from the protests at the 1968 Democratic National Convention in Chicago.

Screenwriter Aaron Sorkin has clearly caught the directing bug following his entertaining debut with ‘Molly’s Game’. Sorkin’s film tackles the trial of seven activists accused of inciting riots during the 1968 riots at the 1968 Democratic convention in Chicago. These events were documented in 1969’s ‘Medium Cool’. Sorkin, however, places emphasis on the aftermath and has recruited an ensemble cast including. Sacha Baron Cohen, Eddie Redmayne, Mark Rylance, Michael Keaton and Joseph Gordon-Levitt. Sorkin’s knack for scintillating trial dialogue was first exhibited in ‘A Few Good Men’. Hope for more of the same.