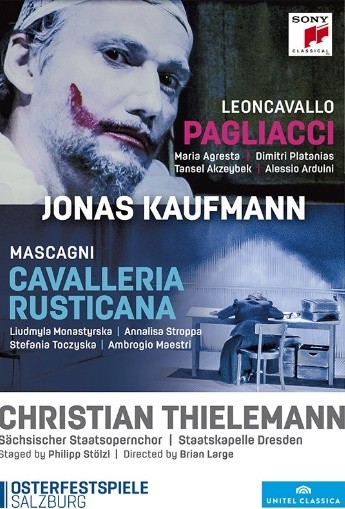 Described by Salzburger Nachricten as “Opera as Great Romantic Cinema”, the two operas, Cavalleria Rusticana and Pagliacci brought record attendances to the Salzburg Easter Festival. Jonas Kaufmann in his debut performances as both Turiddu and Canio, was “stellar” (Daily Telegraph) and sang “both parts so lyrically, with such italianità, mellow with impeccable highs… a pure delight” (Kurier).

The scene is set by film and opera director Philipp Stölzl, whose fascinating vision brings these popular operas to new heights. Stölzl divides the stage into several levels, staging crowd scenes below with the more intimate action going on above – the latter projected with filmic close-ups – doubling and tripling the action. This production, insists Kurier, “simply must be described as world-class”. “Thrilling” concludes the Telegraph.

Sung in Italian with English subtitles.