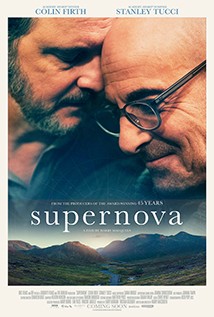 Colin Firth and Stanley Tucci travel across England in search of friends, family and their past before dementia robs one from the other.

Sam (Firth) and Tusker (Tucci) have been together for decades and now they’re taking a jolly trip to the lakes in a camper-van. But both men are keeping secrets from one another. Tusker’s memory loss and confusion are worsening but will he let Sam protect him or will Tusker even allow him to try? The fierce colours of the countryside are nurtured by Dick Pope’s cinematography while Firth and Tucci’s chemistry is straight out of the laboratory. Their performances are pitch perfect, while the warmth and humour that spill from this wonderful film is as heartfelt as the streak of sorrow that runs through its centre. In the end, the film isn't about raging against the dying of the light - like a supernova, what little light is left arrives long after a terminal diagnosis - but about turning resignation into acceptance. This is an intimate movie from actor-turned-film-maker Harry Macqueen, whose 2014 debut, 'Hinterland', was also a two-hander about love.