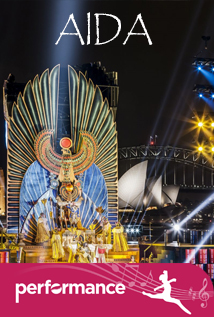 A spectacular production of Verdi's epic production from the amazing setting of Sydney Harbour.

In 'Aida', Verdi masterfully pits the intimate affairs of the heart against the grandeur of the universe: where kingdoms rise and fall and the sands of time grind onwards. There could be no grander setting for such an opera than Sydney Harbour itself, awash with the light of the city and the Sydney Opera House silhouetted against the setting sun.

Handa Opera on Sydney Harbour has become a huge part of the cultural landscape, combining all of the things Sydney does best: world-class opera, champagne and fine dining, sunsets and spectacle on the harbour's edge. It's a monumental undertaking, with a team of more than 700 people involved in the project before a single note is heard over the harbour.

'Aida' is the biggest opera they've ever performed on the opera stage. It is at once an historic epic and an utterly relatable human tragedy. It will make for an interesting comparison with the equally amazing La Scala production we are presenting in November. Performed in Italian with English translations. Director - Gale Edwards; Cast: Latonia Moore, Roberto Aronica. Running time 145m including interval.