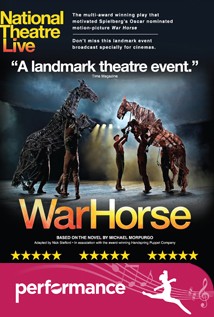 
We are delighted to present the re-release of this powerful and unique stage play filmed live from London’s West End in 2014.

Based on the novel by Michael Morpurgo and adapted by Nick Stafford, ‘War Horse’ has delighted millions of people around the world on stage since it was first performed at the National Theatre in 2007. This will be the first time since its original broadcast in 2014 that ‘War Horse’ can be viewed on cinema screens. Telling the story of young Albert and his beloved horse Joey who, at the outbreak of World War One, is sold to the Cavalry and shipped to France. Though still not old enough to enlist, Albert embarks on a treacherous mission to find him and bring him home. This powerfully moving and imaginative drama is a show of phenomenal inventiveness. At its heart are astonishing life-size puppets by South Africa’s Handspring Puppet Company, who bring breathing, galloping, charging horses to thrilling life on stage. The winner of more than 25 international awards, including the Tony Award for Best Play on Broadway, ‘War Horse’, which has been seen by eight million people worldwide, is directed by Marianne Elliott and Tom Morris. Filmed in front of a live audience in 2014.
165m approx including interval.