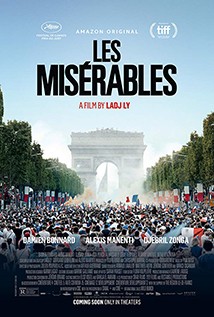 This French submission for the Best Foreign Film Oscar, sees a policeman from the provinces moves to Paris where he discovers an underworld where the tensions between different groups mark the rhythm.

Stéphane (Damien Bonnard), has recently joined the Anti-Crime squad in Montfermeil, a sensitive multi-ethnic district of the Paris projects. Paired up with Chris (Alexis Manenti) and Gwada (Djebril Zonga), whose methods are sometimes unorthodox, he rapidly discovers the tensions between the various neighbourhood groups. When the trio finds themselves overrun during the course of an arrest, a drone begins filming every move they make. The next thing you know, the police are cornered by a mob of armed and angry children. The final scene is nothing short of breath-taking, and even though this film never had a chance at the Oscar up against ‘Parasite’, it was probably a clear second. (Subtitles)