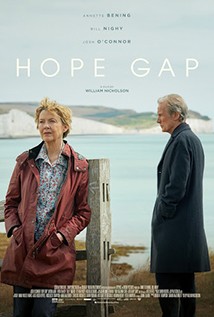 Divorce drama that feels bracingly original and nuanced set against a landscape of pebbly beaches, rocky crags and chalky cliffs.

Delving into the anatomy of a broken relationship, ‘Hope Gap’ stars Annette Benning as Grace and Bill Nighy as Edward who suddenly announces his intention to end their long marriage. Described by writer director William Nicholson as a midpoint between ‘Brief Encounter’ and ‘Who’s Afraid of Virginia Wolf’ the film explores the emotional fallout on Grace and her grown son. Filmed on the Sussex coast near Seaford this is a classy and insightful directorial debut as well as a reminder that some couples are better off apart.