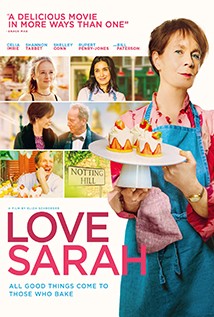 There’s nothing half-baked about this gentle and warm-hearted bakery-setdrama about family, community and later life romance. Cakes feature prominently.

Determined to fulfil her late mother's dream of opening a bakery in charming Notting Hill, 19-year-old Clarissa enlists the help of her mother's best friend Isabella and her eccentric estranged grandmother Mimi (Celia Imrie). There is more than a cinnamon whiff of Richard Curtis about this film which makes no apology for its romanticised affection for London. Celia Imrie’s performance is worth it alone is a delight, ‘exuding the energy of an angry man who hasn’t had a nap this afternoon’