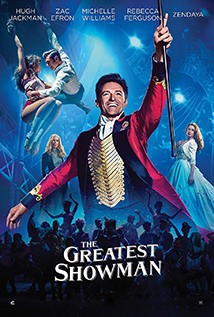 Inspired by the imagination of P.T. Barnum, this is an original musical that celebrates the birth of show business and tells of a visionary who rose from nothing to create a spectacle that became a worldwide sensation.

Although Phineas Taylor Barnum ventured into politics, newspapers, and the lottery business, among many other more or less salubrious professions, during the course of his highly coloured career, he unabashedly declared himself “a showman by profession”, adding that “all the gilding shall make nothing else of me.” For director Michael Gracey, the force behind the giant-hearted vision of ‘The Greatest Showman’, “Barnum was the Steve Jobs or the Jay Z of his time, the original impresario, the original showman.” So, who better to portray this force of nature than the absurdly charismatic Hugh Jackman? This recent cult hit also stars Michelle Williams, Rebecca Ferguson and Zac Effron.