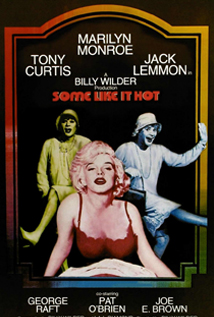 Two Struggling musicians witness the St. Valentine's Day Massacre and are now on the run from the Mob. Jerry (Jack Lemmon) and Joe (Tony Curtis) cross-dress into an all-female band. In addition to hiding, each has his own problems; One falls for another band member (Sugar Kane - voluptuously played by Monroe), but can't tell her his gender, and the other has a rich suitor who will not take "No," for an answer. ‘Some Like It Hot’ is effortlessly fluent, joyous and buoyant: a high-concept comedy that stays as high as a kite, while other comedies flag. "Nobody's perfect" is the last line. Wilder, Lemmon, Curtis and Monroe come pretty close.
USA 1959 Billy Wider 116m
waSelectItemsPrompt