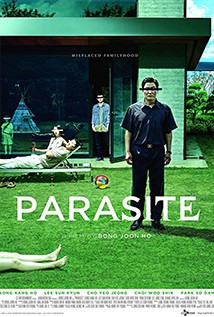 The 2019 Palme D’Or winner is an urgent, brilliantly layered look at timely social themes, which finds writer-director Bong Joon Ho in near-total command of his craft.

In this pitch-black modern fairytale, we meet the Park Family: the picture of aspirational wealth. And the Kim Family, rich in street smarts but not much else. Masterminded by college-aged Ki-woo, the Kim children expediently install themselves as tutor and art therapist, to the Parks. Soon, a symbiotic relationship forms between the two families. The Kims provide "indispensable" luxury services while the Parks obliviously bankroll their entire household. When a parasitic interloper threatens the Kims' newfound comfort, a savage, underhanded battle for dominance breaks out, threatening to destroy the fragile ecosystem between the two families. This has been hailed by some critics as a nearly perfect film, from Bong's masterful use of framing and visual language and control of a wildly shifting tone to the performances (all terrific) to the commentary on class division. A fitting movie for our times, that you must see before the inevitable American remake sands down all its razor-sharp edges.