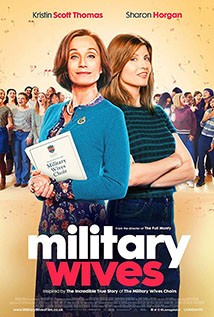 With their partners away serving in Afghanistan, a group of women on the home front form a choir and quickly find themselves at the centre of a media sensation and global movement.

The film focuses on two women and their differing attempts to raise the spirits of those left behind at a military base. With their partners away in Afghanistan, the women fall into a familiar routine, glumly aware of what lies ahead as they either wait for their return or for news they hope will never arrive. It’s a mode of living that Kate (Kristin Scott Thomas) knows all too well, her son killed in battle while her husband continues to fight and as she hands over social committee duties to Lisa (Sharon Horgan), she finds it difficult to let go. Kate is uptight and chilly while Lisa is laidback and unconventional and the two clash as they find ways to distract the women around them. But an uneasy partnership is formed as they decide upon a choir, an idea that grows into something neither of them could have expected. There is no denying that this is a film that squeezes a well-known true story into the crowd-pleasing packaging of a feelgood Brit-com. But we know it will be a blast, especially as the director rose to fame with 1997’s ‘The Full Monty’.