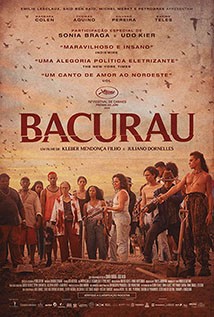 A confident genre hybrid film quite unlike any other film you have seen, brought to us by the talent behind 2016’s ‘Aquarius’.

The title of the film refers to the fictional remote village planted in a parched rural area of Northeast Brazil, whose small yet united population follows organized strategies to combat a gang of American psychopaths. Documentarian Michael (Udo Kier) heads deep into the Brazilian outback to profile the village that recently lost its matriarch. As his relationship with the locals grows, he witnesses their true selves coming to light and unpacks the unusual and mysterious secrets they have buried. Part siege movie, part rural drama, part gorefest, ‘Bacurau’ also stars Sonia Braga and Barbara Colen.