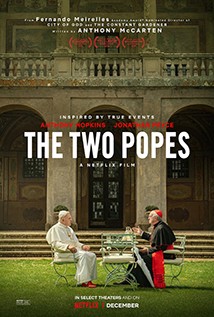 Behind Vatican walls, the conservative Pope Benedict and the liberal future Pope Francis must find common ground to forge a new path for the Catholic Church.

Frustrated with the direction of the church, Cardinal Bergoglio (Jonathan Pryce) requests permission to retire in 2012 from Pope Benedict (Anthony Hopkins). Instead, facing scandal and self-doubt, the introspective Pope Benedict summons his harshest critic and future successor to Rome to reveal a secret that would shake the foundations of the Catholic Church.

What makes ‘The Two Popes’ so delightful, other than the very funny script, is watching two seasoned actors play off each other, illustrating what the craft of acting is really about. This is the most recent film from the brilliant Fernando Meirelles, best known for ‘City of Gad’ and ‘The Constant Gardener’.