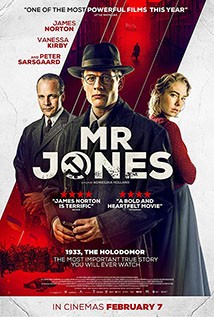 This bold and heart-felt biopic commemorates the heroic efforts of Gareth Jones: the Welsh journalist who broke the story of the horrific famines within the Soviet Union in the 1930s.

Gareth Jones (James Norton) was a teetotal, Russian-speaking Cambridge scholar from Barry, south Wales. He made his name after ‘fortunately’ finding himself on an airplane with Adolf Hitler, and in possession of an exclusive interview. So off Jones goes to Moscow, ostensibly to try to interview Joseph Stalin too, but he follows his journalist’s nose for a story to slip into Ukraine, where reporters were banned. There he exposed the Holodomor, a famine caused by Stalin’s agricultural policies in which up to 10 million people died. The movie is partly about Jones’s personal nightmare and his anguish when he was at first disbelieved, but it is also about his final vindication. (Some Subtitles)