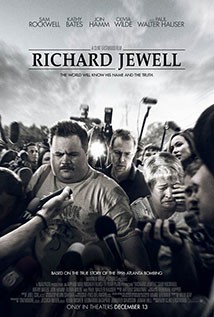 Clint Eastwood returns behind the camera with this true story about an American security guard Richard Jewell (Paul Walter Hauser) who saves thousands of lives from an exploding bomb at the 1996 Olympics, but is vilified by journalists and the press who falsely reported that he was a terrorist.

This is a story of what happens when what is reported as fact obscures the truth. "There is a bomb in Centennial Park." The world is first introduced to Jewell as the security guard who reports finding the device at the 1996 Atlanta Olympics - his report making him a hero whose swift actions save countless lives. But within days, the law enforcement wannabe becomes the FBI's number one suspect, vilified by press and public alike, his life ripped apart. The supporting cast includes Sam Rockwell, Olivia Wilde and Jon Hamm.