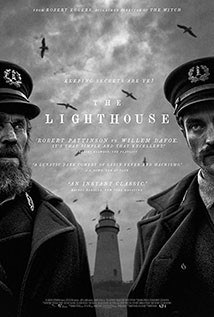 A hypnotic and hallucinatory tale of two lighthouse keepers on a remote and mysterious New England island in the 1890s, that further establishes Robert Eggers as a filmmaker of exceptional talent.

Aboard a steamboat that punches through a sea of mist, foghorns blasting and engine chugging, are Thomas Wake (Willem Dafoe) and Ephraim Winslow (Robert Pattinson). Wake is a spirited-eyed, rotten-toothed ex-sailor with a penchant for liquor and sea-dog stories. Winslow is his right hand - a bookish, cash-strapped former logger on a quest for money and on the run from some dark secrets on the mainland. Shot on location, in academy ratio and austere black-and-white, ‘The Lighthouse’ chronicles the four weeks the pair spend ‘keeping’ the lighthouse on a barren island off the coast of Nova Scotia. Dafoe and Pattinson are nothing short of sensational, and a special mention must go to cinematographer Jarin Blaschke.