The Man who Killed Don Quixote 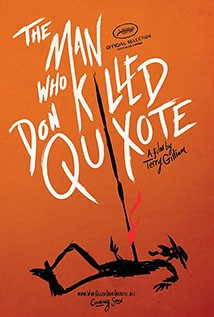 It has been called one of the most cursed film productions ever. Most assumed that Terry Gilliam’s ‘Don Quixote’ project would never be made, much less see the light of day. Plagued by endless delays, natural disasters, dying actors, greedy financiers and good old-fashioned Icarus-level hubris. But alas – it has arrived!

Toby (Adam Driver), a cynical advertising director, finds himself trapped in the outrageous delusions of an old Spanish shoemaker (Jonathan Pryce) who believes himself to be Don Quixote. In the course of their comic and increasingly surreal adventures, Toby is forced to confront the tragic repercussions of a film he made in his idealistic youth - a film that changed the hopes and dreams of a small Spanish village forever. Can Toby make amends and regain his humanity? Can Don Quixote survive his madness and imminent death? Or will love conquer all? Utterly beautiful and endlessly inventive. (Some subtitles)