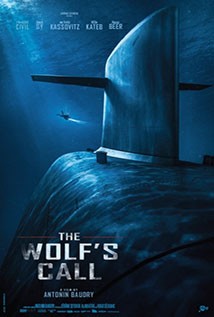 With nuclear war looming, a military expert in underwater acoustics strives to prove things aren't as they seem - or sound - using only his ears. A critically acclaimed French action-thriller.

Set in the near future, we follow Chanteraide (François Civil), a young naval Acoustic Warfare Analyst (AWA) who finds himself in the midst of a troubling mystery and on the brink of nuclear war. After an unexpected vessel appears in close proximity to the submarine, the mission is almost compromised. Seeking to right his wrong, Chanteraide begins to investigate the mysterious vessel’s origins and uncovers a very sinister threat. Very much like the beginning of the Oscar-winning ‘The Hurt Locker’, you will be hooked from the very start. In addition to being a compelling thriller, ‘The Wolf’s Call’ also casts a light on the fascinating job of an AWA. It is their job to listen to the ocean around them and decipher what the noises they hear belong to. (Subtitles)