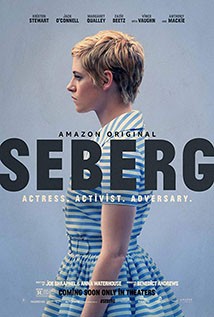 Seberg is inspired by true events about the French New Wave darling and Breathless star, Jean Seberg (Kristen Stewart), who in the late 1960s was targeted by the FBI because of her support of the civil rights movement and romantic involvement with Hakim Jamal (Anthony Mackie), among others.

Already mentally and physically scarred by the sadistic Preminger when, at 18, she was nearly burned alive on camera (during the stake sequence she was actually set on fire by reckless, negligent direction), she miraculously survived to become the darling of New Wave cinema in Jean-Luc Godard’s ‘Breathless’. Seberg's life and career are destroyed however, by Hoover's overreaching surveillance and harassment in an effort to suppress and discredit her activism. Kristen Stewart is excellent in the title role, reminding us of Seberg's vibrant strength and defiance, and standing up for her truth.