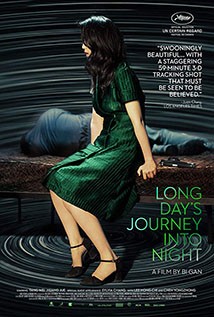 A noir-tinged film told in two parts: the first an achronological mosaic, the second a nocturnal dream. Centring around his native province of Guizhou in southwest China, the director has created a film like nothing you've seen before.

Luo Hongwu (Huang Jue) is a former casino manager who has returned to the depressed home-town he left 20 years before. He finds an old photo of a woman with whom he was passionately in love in the old days called Wan Qiwen (Tang Wei) but had vanished. His return trigger an obsessive need to find her again, and to delve into his memory for clues. “There is such artistry in this film, which is like a hallucinatory experience, whose sinuous camera movements take you on a long journey into memory and fear and a night full of dreams – with influences from David Lynch and Wong Kar-wai.” – Peter Bradshaw (The Guardian). (Subtitles)