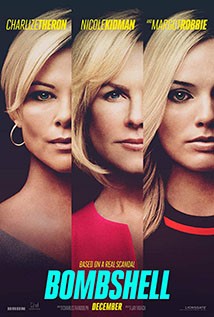 A revealing look inside the most powerful and controversial media empire of all time; Fox News, and the explosive story of the women who brought down the infamous man who created it.

The women in question are Fox News hosts Megyn Kelly (Charlize Theron), Gretchen Carlson (Nicole Kidman) and a composite character called Kayla (Margot Robbie). All three are being abused by Fox honcho Roger Ailes (John Lithgow) and are unsure what - if anything -to do about it, especially since none is sure if she is the only one. The script is very well written by Director Roach and Charles Randolph (whose script for ‘The Big Short’ won an Oscar), and despite the heavy subject, is sprinkled with humour, creating a hugely entertaining film.