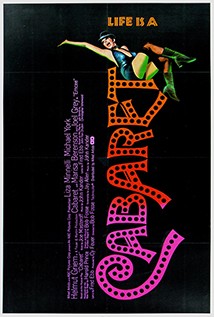 Our final selection in this Hollywood Musical BFI tour is this incredibly stylish study of the hedonism and sexual ambiguity of pre-war Berlin, which made Liza Minnelli (who won Best Actress) a star.

Often described as a musical for people who don’t like musicals, it sets its scene in 1931 Berlin, against a backdrop of increasing antisemitism and the growing Nazi Party. We follow Brian (Michael York), a new British arrival in the city, as he befriends Sally Bowles (Minnelli), a talented performer at the risqué Kit Kat Klub. Full of brilliantly choreographed set-pieces, ‘Cabaret’ influenced generations of filmmakers and remains a key queer cinema film with its early exploration of bisexuality on screen. The film is centred around a truly fabulous performance from Minnelli, evincing both exuberance and vulnerability as she wields glamour against despair.