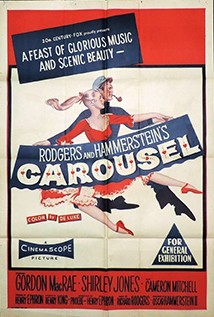 Based on the 1945 Rodgers and Hammerstein stage musical of the same name, it contains what many critics consider to be some of the pair’s most beautiful songs – no small feat, as they wrote a string of hits from ‘Oklahoma!’ to ‘The King and I’.

The story revolves around Billy Bigelow (Gordon Macrae), a rough-talking macho carousel barker, and Julie Jordan (Shirley Jones), a young mill worker living in a small town in Maine. They fall in love, but after they are both fired from their jobs, struggle to remain afloat. Years later, following a tragic accident, Billy is given a chance to redeem himself. An unusually serious and exploratory musical, ‘Carousel’ juxtaposes elements of realism with pure fantasy alongside its lovely songs, and is led by newcomer Jones and singer-actor MacRae with wonderful chemistry and charisma.