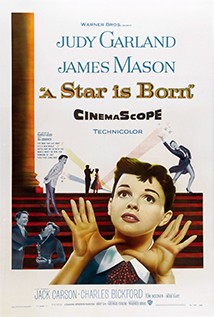 The second of four adaptations of the classic musical melodrama, recently updated to acclaim by Bradley Cooper in 2018, George Cukor’s ‘(The Women’, ‘My Fair Lady’, ‘A Philadelphia Story’) epic 1954 version of ‘A Star is Born’ features an Oscar nominated Judy Garland and James Mason as the lovers on opposing ends of fame, and is widely considered one of the greatest musicals of all time.

Meeting inebriated former matinee idol Norman Maine (Mason) on stage, talented aspiring singer Esther (an effervescent Garland) saves him from a potentially embarrassing incident. Grateful, he asks her out to dinner and, impressed by her talent, aims to help her succeed. Losing touch and facing obstacles, it’s a while before he is able to do so, but when he does her career flourishes – leading her (renamed ‘Vicki Lester’) to international glory while his star, conversely, remains on the wane. Generating an entire world within its generous running time, Cukor’s version boasts superb songs by Harold Arlen and George Gershwin including the sublime and devastating ‘The Man Who Got Away’ and a truly extraordinary performance from Garland. Intended as her comeback role, four years after the suspension of her MGM contract following a suicide attempt, she seems to identify with both Esther’s dreams and Norman’s downfall in her raw, intense and thrillingly vulnerable turn. After the recent bio-pic ‘Judy’, now see the real thing in one of her greatest roles. USA 1954 George Cukor 181m