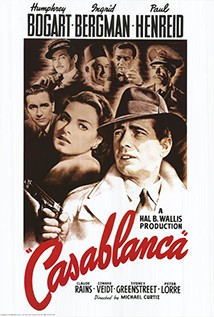 Although we continued to present 2 open-air films as part of our annual Festival in Priory Park, in 2016, we presented for the first time in Chichester a drive in Movie event, using the Festival Theatre’s car park. It was quite a technical and logistical challenge indeed, with over 130 cars to accommodate with good site lines, and we selected ‘Casablanca’ to be shown on one of the biggest outdoor screens in the country. - Roger Gibson.

A truly perfect movie, the 1942 ‘Casablanca’ still wows viewers today, and for good reason. Its unique story of a love triangle set against terribly high stakes in the war against a monster is sophisticated instead of outlandish, intriguing instead of garish. Humphrey Bogart plays the allegedly apolitical club owner in unoccupied French territory that is nevertheless crawling with Nazis; Ingrid Bergman is the lover who mysteriously deserted him in Paris; and Paul Heinreid is her heroic, slightly bewildered husband. Claude Rains, Sydney Greenstreet, Peter Lorre and Conrad Veidt are among what may be the best supporting cast in the history of Hollywood films plus a great symphonic and musical score This is certainly among the most spirited and ennobling movies ever made.
USA 1942 Michael Curtiz 100m