Cabin in the Sky 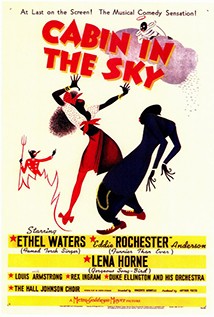 Vincente Minnelli’s (‘An American in Paris’, ‘Meet Me in St. Louis’) first feature, with its all-black cast, provided a rare and invaluable showcase for some of the era’s most legendary African American performers.

This Faustian fantasy stars Ethel Waters, Eddie ‘Rochester’ Anderson and Lena Horne, with Louis Armstrong and Duke Ellington performing alongside. Based on the hit Broadway musical of the same name, it follows compulsive gambler (Anderson) as he dies in a drunken fight. Upon awakening in purgatory, he learns he will be sent back to Earth for six months to prove he deserves to be in heaven, while an angel (Kenneth Spencer) and the devil’s son (Rex Ingram) fight for his soul. With its dreamlike sets and cutting-edge production design, knockout dance numbers and lively songs, it is a parable of salvation and an elaborate fantasy of African American life.