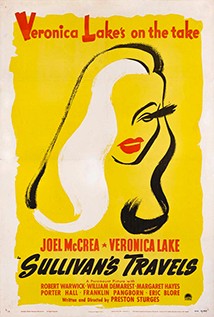 We present a single screening of Preston Sturges’ best film in conjunction with Nick Smedley’s book about this very under-rated director.

John L Sullivan (Joel McCrea), Hollywood's top director of lightweight hits, wants to film a portentous breadline America novel, ‘O Brother, Where Art Thou?’, as his serious social statement. The horrified studio execs, smelling disaster, tell him he knows nothing of poverty, so John vows to study life at the bottom, setting out moneyless as a tramp. But of course, all does not go to plan.

‘Sullivan's Travels’ is a gem, an almost serious comedy not taken entirely seriously, with wonderful dialogue, eccentric characterisations, and superlative performances throughout. It is a rare work which combines realism and whimsy, optimism and cynicism, intellectualism and slapstick comedy to conjure up a unique kind of entertainment. It is just as relevant today as it was when it was released in 1941.