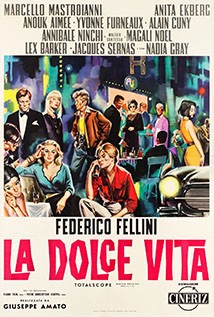 A director whose name loomed large over his films, Federico Fellini was one of the great Italian filmmakers in modern cinema. This is the first in a series of his films that we will be screening in conjunction with the BFI in early 2020 to mark the centenary of his birth.

A series of stories following a week in the life of a philandering Roman paparazzo journalist Marcello Rubini (Marcello Mastroianni), who could easily be Fellini’s alter-ego. The film includes the image of Anita Ekberg cavorting in the Trevi fountain, which is one of the era’s most iconic. Beginning with the startling image of a statue of Christ being transported over the city by helicopter, Fellini’s panorama of the contemporary Roman ‘good life’ marked a decisive turning point in the director’s career. Leaving behind his small-scale, realism-rooted dramas of the 50s, this episodic story of a tabloid reporter’s comings and goings within the decadent upper reaches of modern Italian society found Fellini moving in a flamboyant new direction. The film’s atmosphere of moral lassitude, together with its then scandalous sexual frankness, created a popular sensation, introducing the world to the word paparazzi.