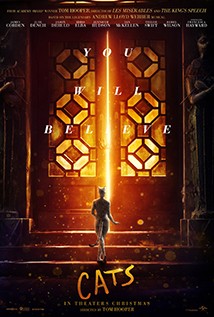 A tribe of cats called the Jellicles must decide yearly which one will ascend to the “Heaviside Layer” and come back to a new Jellicle life. Oscar-winning director Tom Hooper (‘The King's Speech’, ‘The Danish Girl’) brings astonishing new technology to transform his superstar cast, which include Idris Elba, Rebel Wilson, Ian McKellen, Judi Dench, Taylor Swift, James Corden, Ray Winstone and Jennifer Hudson. This musical, sure to be nominated in multiple Oscar categories, includes the well-known song ‘Memory’ as sung by Grizabella (Hudson). Definitely the holiday film to look out for.