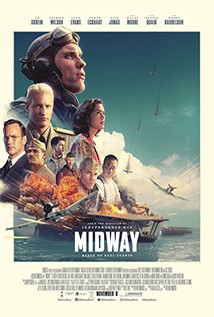 The story of one of the pivotal battles of World War II, told by the leaders and the sailors who fought it.

The film centres on the Battle of Midway, a clash between the American fleet and the Imperial Japanese Navy which marked a pivotal turning point in the Pacific Theatre during WWII. The confrontation took place between the 4th and 7th June 1942, only six months after Japan's attack on Pearl Harbour and one month after the Battle of the Coral Sea. The film, based on the real-life events of this heroic feat, tells the story of the leaders and soldiers who used their instincts, fortitude and bravery to overcome the odds. The all-star cast includes Woody Harrelson, Luke Evans, Mandy Moore, Dennis Quaid, Aaron Eckhart and Patrick Wilson