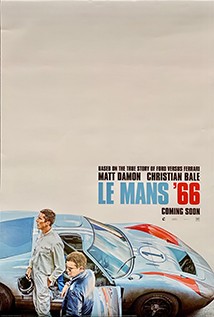 Together they battled corporate interference, the laws of physics, and their own personal demons to build a revolutionary race car for Ford Motor Company and take on the dominating race cars of Enzo Ferrari. This spectacular film delivers all the polished auto action audiences will expect - and balances it with enough gripping human drama to satisfy non-racing enthusiasts. Look out for Tracy Letts as Henry Ford II, a grumbling bulldog of a man who has an incredible scene with Bale when Miles takes Ford for a spin in their new race car.