Marianne and Leonard: Words of Love 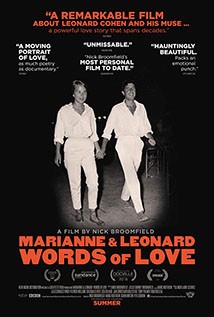 Nick Broomfield returns with an in-depth look at the relationship between the late musician Leonard Cohen and his Norwegian muse Marianne Ihlen.

This is Broomfield's (‘Aileen’, ‘Kurt & Courtney’) most personal and romantic film of his storied career. The documentary starts on the Greek island of Hydra in 1960, where Leonard Cohen, then a struggling and unknown fiction writer, and Marianne Ihlen, a single mother with a young son, became part of community of expat artists, writers and musicians.

Never-before-seen footage shot by Broomfield and legendary documentarian D.A. Pennebaker make for a unique portrait of an idyllic 1960's bohemia. It was a time that left a lasting imprint on both Marianne and Leonard, whose friendship would last another fifty years before their deaths in 2016. An absorbing glimpse of a fascinating chapter of its subjects' lives.