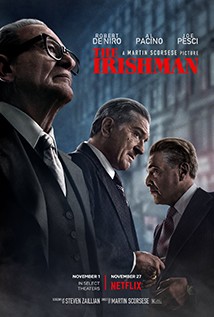 This biographical crime thriller follows Frank Sheeran (De Niro) as he recalls his past years working for Russell Bufalino (Pesci). Now older, the WWII veteran once again reflects on his most prolific hits and, in particular, considers his involvement with his good friend Jimmy Hoffa's (Pacino) disappearance in 1975. The film’s ace is a quietly electrifying Pesci, with a character so dramatically distant from his previous Scorsese incarnations (here, he is rational and professional). Surprisingly, there is plenty of humour in this film, where instead of flash and brash, Scorsese has delivered an effectively moving portrait that focuses on the emotional toll of being atop the mob underworld.

Please note that we have added a short 10 minute intermission (due to popular demand) about half way through the film.