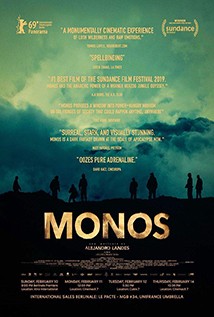 Colombia's Academy Awards foreign film submission is a beautiful and intense film, which Peter Bradshaw (The Guardian) gives 5-stars, and places somewhere between ‘Apocalypse Now’, ‘Lord of the Flies’ and ‘Embrace of the Serpent’.

A survivalist saga set on a remote mountain in Latin America. The film tracks a young group of soldiers and rebels - bearing names like Rambo, Smurf, Bigfoot, Wolf and Boom-Boom - who keep watch over an American hostage, Doctora (Julianne Nicholson). The teenage commandos perform military training exercises by day and indulge in youthful hedonism by night, an unconventional family bound together under a shadowy force known only as The Organization. As visually splendid as it is thought-provoking, ‘Monos’ takes an unsettling look at human nature whose grim insights leave a lingering impact.