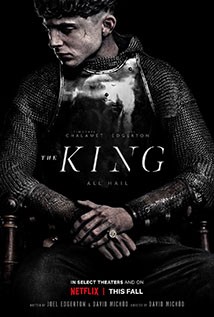 Hal, wayward prince and heir to the English throne, is crowned King Henry V after his tyrannical father dies. Now the young king must navigate palace politics, the war his father left behind, and the emotional strings of his past life.

Opening near the end of the bloody reign of Henry IV (Ben Mendelsohn), we find Timothée Chalamet as the king’s dissolute but peace-loving son Prince Hal. He is the heir to the throne but is much more interested in boozing and womanizing with his old pal John Falstaff (Joel Edgerton) than fronting up to his hateful father. When his younger brother is killed in battle, he has no choice but to assume his responsibilities. David Michôd (‘Animal Kingdom’) has created something genuinely fresh and confident, and strong source material together with gripping performances make this a period drama worth hailing.