The Swallows of Kabul 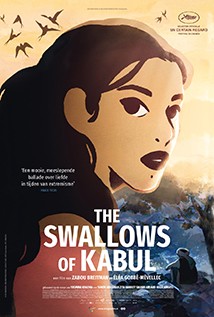 A full-length animated feature based on the eponymous novel by Libyan writer Yasmina Khadra, this is a very feminine endeavour in its gentle candour and colourful sensibility, portraying life under Taliban control.

Violence is neither fetishized nor sanitised. The blood is seen as it soaks the burka, yet the fatal wounds are never graphically depicted. The directors portray a regime that relentless and sadistically castigates females and suggests that women are less worthy than men. “Effective animated drama about two couples struggling under the cruelty of Taliban rule.” – Screen. (Subtitles)