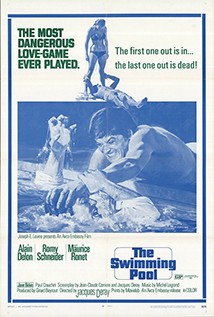 Jacques Deray’s breakthrough film in 1969 was the first in a series of glossy box office hits that placed him in the first rank of successful French mainstream filmmakers throughout the Seventies.

It’s a tour de force of erotic languor turning into fear and horror. Lovers Marianne and Jean-Paul (Romy Schneider and Alain Delon) spend their vacation in a villa near St Tropez. The main feature of the villa is a swimming pool, around which revolves most of the action. After a visit Marianne invites former lover Harry (Maurice Ronet) and his teenage daughter Penelope (a young Jane Birkin) to stay. Tension between the grown-ups rises especially when Jean-Paul seduces Penelope. The consequences are deadly in a game of sexual jealousy and possessiveness. Newly restored. “Superbly controlled psychological thriller.” – The Guardian. (Subtitles)