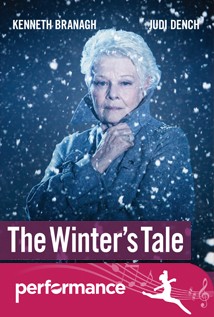 We are delighted to announce the return of the Olivier Award winning production of 'The Winter's Tale' starring Kenneth Branagh and Judi Dench.

A production from the Branagh Theatre with Kenneth Branagh and Judi Dench.

The critically acclaimed production was the first in the hugely successful Kenneth Branagh Theatre Company Live season, which was broadcast to cinemas from London's Garrick Theatre over the course of a year in 2015. Due to phenomenal demand, the production returns to cinemas this festive season. 210m approx including interval. 210m approx including interval.