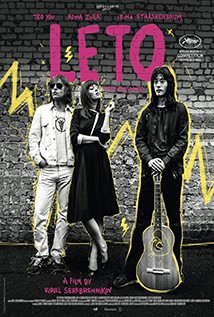 A love triangle emerges around a rock and roll musician, his protégé, and his wife in 1980s Russia. A fascinating glimpse of Soviet life of this period.

Embellished with numerous fictional details, the true story of influential, tragically short-lived Soviet singer-songwriter Viktor Tsoi, ‘Leto’ happily avoids the bland structural pitfalls of the musical biopic. A confirmed rock star of the early eighties (Mayk) struggles to promote rock music in the declining Soviet Union when another musician (Viktor Tsoi) arises as a new promising talent. His wife, Natalia can't help to be attracted to this new talent... and so does he. Quite early in the film, you understand the movie is not just all about following the emergence of Viktor Tsoi, the Kurt Cobain of Russia (or the Jim Morrison of Russia back in those days), but also about giving pride of place to the ideal of rock. Serebrennikov pays tribute to what rock and roll meant for his generation, what it inspired and what it felt to listen to this music in this oppressive atmosphere of Russia in the 80's. The film vibrates with music, but is simultaneously heavy with nostalgia and a sense of loss. It’s a love triangle, a story of struggle, of conflicted loyalties, and most of all a story of passion for a whole package of things in life that may be out of reach for most of these young rockers. Banned from appearing at the Cannes premiere, director Serebrennikov is under house arrest in Russia, but his wild, whirling, often confounding 1980s rock opus moves freely. (Subtitles)