THE CAT AND THE CANARY 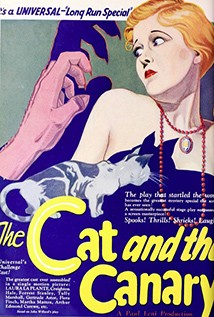 Relatives of an eccentric millionaire gather in his spooky mansion on the 20th anniversary of his death for the reading of his will. This silent expressionist comedy horror is quite unlike the Bob Hope sound version, greatly enhanced by Steven Horne’s imaginative live piano accompaniment.

An old, dark house. A lunatic on the loose. A fortune people will do anything to get their hands on. These are the ingredients comprising one of Universal's earliest screen shockers, 1927's silent feature ‘The Cat and the Canary’. Rich old Cyrus West's relatives are waiting for him to die so they can inherit. But he stipulates that his will be read 20 years after his death. On the appointed day his expectant heirs arrive at his brooding mansion. The will is read, and it turns out that Annabelle West, the only heir with his name left, inherits, if she is deemed sane. If she isn't, the money and some diamonds go to someone else, whose name is in a sealed envelope. Before he can reveal the identity of her successor to Annabelle, Mr. Crosby, the lawyer, disappears. The first in a series of mysterious events, some of which point to Annabelle in fact being unstable. This is one eerie movie. That it is over 77 years old shouldn't detract from its place among "scary movies." The production values are scrumptious. The acting is enjoyably over the top (Aunt Susan) but all in all, an eerie night with shadows and interesting interplay among the characters.

Starting off with a hand wiping off cobwebs covering the opening titles, director Paul Leni (German expressionist director) proceeds to play up the story's spookiness to the hilt. He casts dark shadows on nearly every corner of celluloid, seizing every opportunity to heighten the story's claustrophobic nature and depict Annabelle, as the title suggests, like a canary surrounded by cats. This is a rare screening of an almost lost classic.

We are delighted to welcome back pianist Steven Horne with his box of tricks to entertain us imaginatively accompanying this classic scary movie!