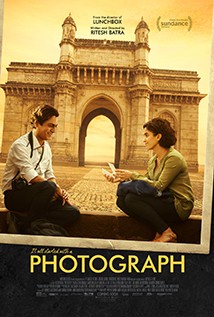 Director Ritesh Batra made his name with his lovely feature directorial debut, ‘The Lunchbox’, back in 2013, an understated story of a man and woman who become accidental pen pals. Now, with ‘Photograph’, he’s returned with another high-concept film, executed with an organic touch, that’s as beautiful as its predecessor.

Sanya Malhotra stars as Miloni, a quiet young woman from a modestly prosperous family in Mumbai studying to become a chartered accountant. On a stroll past the Gateway of India monument one day, she agrees to have her picture taken by Rafi (Nawazuddin Siddiqui), who does the same all day, every day for tourists at 50 rupees a piece. What Miloni doesn’t know is that Rafi’s grandmother is pressuring him to marry and he later uses the photo to prove to her that he is dating someone. Now, the grandmother (Farrukh Jaffar) is coming to town and Rafi must track down Miloni and ask her to pose as his girlfriend. While no major discussion on the subject takes place, Miloni and Rafi’s differing economic classes run as an undercurrent throughout the film.  ‘Photograph’ sidesteps condescension, though, in depicting Mumbai’s poor, even as it highlights what could be seen as their folksy wisdom. There are abundant laughs to be found (Jaffar in particular is hilarious) but this is no romantic comedy. Like ‘The Lunchbox’, ‘Photograph’ strips away all that could have been false about its premise and replaces the clichés with patient scenes that allow the true atmosphere of Mumbai to flood into the film, making everything as real and tactile as Miloni and Rafi’s burgeoning attraction. (subtitles)