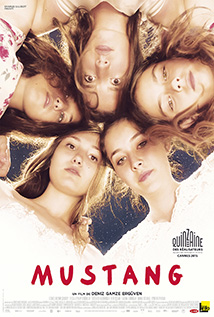 When five orphan girls are seen innocently playing with boys on a beach, their scandalized conservative guardians confine them while forced marriages are arranged. .

It’s the beginning of summer. In a small village in northern Turkey, Lale and her four sisters are on their way home from school, innocently playing with local boys. But prying village eyes view their games with suspicion about the girls behaviour. Their refusal to repent quickly causes a scandal among the family. Drawing vocal support from critics, festivals and audiences across the globe, this stunning Oscar-nominated debut from Turkish female director Deniz Gamze Ergüven is set to be one of the most talked-about and celebrated films of the year.(subtitles)
Turkey 2016 Deniz Gamze Ergüven 97m