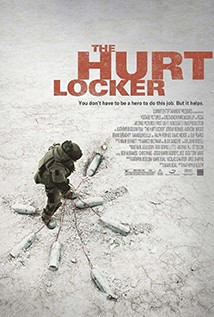 Rightly attracting major awards attention, Kathryn Bigelow’s The Hurt Locker is a supreme, tense and gripping piece of cinematic drama, and became the first woman director to win an Oscar in 2008.

And it grabs your attention from the stunning opening scene, which perfectly gets across the dangers faced by the specialist bomb disposal squad that we spend the rest of the film following. When renegade Sergeant William James takes command of a highly trained bomb disposal unit, he frequently risks the lives of himself and those around him with his suicidal methods and a complete disregard for danger. Caught in the middle are his subordinates Sergeant J.T. Sanborn and Specialist Owen Eldridge, who can only watch as their leader descends further into addiction: an addiction to war. Covering a wide range of genres, her films include ‘Near Dark’ (1987), ‘Point Break’ (1991), ‘Strange Days’ (1995), ‘K-19: The Widowmaker’ (2002), ‘The Hurt Locker’ (2008), ‘Zero Dark Thirty’ (2012), and ‘Detroit’ (2017). With ‘The Hurt Locker’, Bigelow became the first woman to win the Academy Award for Best Director, the Directors Guild of America Award for Outstanding Directing, the BAFTA Award for Best Direction,