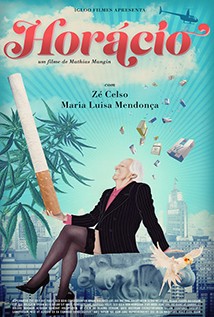 The story of a dysfunctional family, in which social norms no longer exist, and where relationships are submitted to each one’s impulses.

The head of the family is Horatio, a smuggler on the run from the law, hiding in a surreal, baroque apartment with his daughter, Petula, and Milton, his favorite thug. While he keeps his daughter locked up in her bedroom, Horatio flirts with his goon, for whom he has had repressed feelings for years. However, Milton’s love for a mysterious woman, and Petula’s attempts to free herself with the help of a former lover, clash with Horatio’s tyrannical whims. Both satirical and fantastical, the movie builds a tale of underworld crime in which issues such as harassment, chauvinism and greed reach a boiling point, progressively making it impossible for the characters to coexist. The film can be seen as a metaphor for a highly materialistic country, determined by an obscure subconscious. (Subtitles)