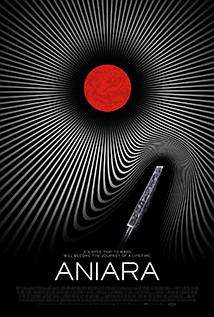 A spaceship carrying settlers to Mars is knocked off course, causing the consumption-obsessed passengers to consider their place in the universe.

This is an exemplary high-concept contemporary sci-fi film. We begin with a doomed earth, spiralling into economic doom. A shuttle brings a group of lucky passengers out of Earth’s atmosphere and on to a giant craft called Aniara. This craft at first seems a delightful space-floating hotel and shopping mall, a delightful way station before a new home on Mars. Only one problem. Shortly after setting space-sail, space debris smashes into one of the craft’s reactors. The captain has to jettison the ship’s nuclear fuel supply. The craft and its passengers must now float until - so the ship’s captain tells everyone - they happen upon a gravitational field that will allow them to get back on course. When the ship veers off course, crew leaders try to keep the passengers from learning the truth. Power struggles ensue, fantasies and fears displace reality, and the ship starts to resemble (gasp!) a mini city on earth. Caught in the middle of the chaos and the factions is a cheerful woman who tries to make the best of the unfortunate circumstances. If only her companions would let her. The production design by Linnéa Pettersson and Maja-Stina Åsberg is, in keeping with a great European sci-fi mini tradition, a lot more credible and interesting than that of a mainstream Hollywood effort like ‘Passengers.’ Mesmerizing and haunting, it may leave you gasping for breath at times. Premiered at Toronto 2018. (Subtitles)