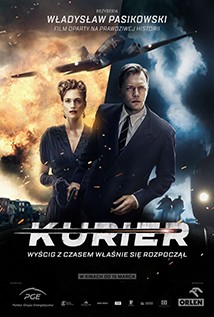 This is a powerful new film and true story about the heroics of a WWII resistance fighter. The film has been a huge box office success in Poland.

‘Kurier’ tells the story of Jan Nowak Jeziorański, who during the Second World War was one of the key figures in the Polish resistance. A man of extraordinary courage who was serving as an emissary between the commanders of the AK resistance movement (Home Army) and the Polish Government in Exile, as well as other allied governments, he came to be known as the Courier from Warsaw. He was extremely courageous, a hero that went back and forth between the Government in Exile in London and occupied Poland, which was extremely difficult at the time because of the spies constantly on his tail. The film is directed by Władysław Pasikowski, one of the most significant names in post-communist Polish cinematography. Pasikowski has cast a formidable line-up of both Polish and international acting talent including Mirosław Baka, Adam Woronowicz and Zbigniew Zamachowski. (Subtitles)