TWO FOR THE ROAD 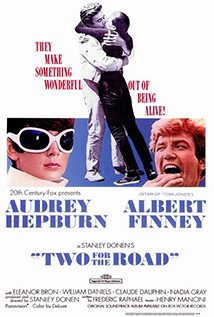 A couple (Audrey Hepburn & Albert Finney) in the south of France spin down the highways of infidelity in their troubled ten-year marriage, portrayed in fragments.

One of the great films by Stanley Donen (‘Singin' in the Rain’, ‘Charade’) after the studio era had come to a close, this was a break-off from the old system, one which allowed Donen to further stretch his art, aided by screenwriter Frederic Raphael (Stanley Kubrick's ‘Eyes Wide Shut’), in a tale of a couple voluntarily stretching themselves through the long period of their relationship. After so many studio-system smash-hits, ‘Two for the Road’ marked a reckoning for director Donen which went on to influence directors like Jacques Rivette for its portrayal of a couple in interaction and its keen sense of duration across the length of their time together And the theme music is just beautiful. Henry Mancini once said that it was his favourite movie score of his music. Not  another romantic comedy, it is a drama with edge.