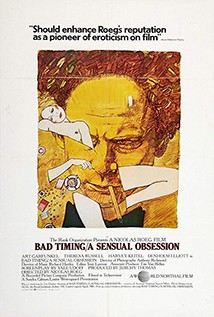 A psychiatrist (Art Garfunkel) enters a torrid relationship with a married woman. When she ends up in the hospital from an overdose, an inspector (Harvey Keitel) becomes set on discovering the demise of their affair.

The setting is Vienna. A young American woman is brought to a hospital after overdosing on pills, apparently in a suicide attempt. A police detective suspects foul play on the part of her lover, an American psychology professor. As doctors try to save her life, the detective interrogates the professor, and through flashbacks we see the events leading up to the woman's overdose; One of Roeg's most complex and elusive movies, building a thousand-piece jigsaw from its apparently simple story of a consuming passion between two Americans in Vienna. Seen through the prism of the girl's attempted suicide, their affair expands into a labyrinthine enquiry on memory and guilt as Theresa Russell's cold psychoanalyst lover (Garfunkel) himself falls victim to the cooler and crueller investigations of the detective assigned to her case (Keitel in visionary form as the policeman turned father-confessor).