GO TO HELL AND TURN LEFT 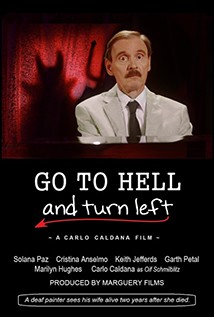 A deaf painter named Oif Schmilblitz struggles with alcohol and the death of his wife Emily.

When he sneaks his way to a private reception to play spy for his agent, he spots a guest who bears a striking resemblance with the late Emily. As he tries to find out who she is, he is caught in a whirlwind of misunderstanding, mistaken identity, and marital intrigue - all to the tune of minimal dialogue and an endless stream of gags. ‘Go to Hell and Turn Left’ is director Caldano's fourth feature film, and here he has created a unique film featuring a deaf character in a comedy with limited dialogue.